FREE. Tuesday, July 21, 10 am – noon
DeKorte Park, Lyndhurst
We’ll look for swallows, herons, and other birds of interest as well as butterflies and plants that attract them. The walk is run by the NJSEA and the Bergen County Audubon Society. For information contact Don Torino or call 201-230-4983. Register here.

Join Bill Streeter, Director of the Delaware Valley Raptor Center, and several of his raptor friends, including falcons, a Golden Eagle and other amazing creatures from the Meadowlands region. Streeter will draw on his 30 years of experience studying and rehabilitating raptors to entertain and educate attendees. Register here.

This majestic bird of prey has been mounting a comeback since it was nearly wiped out by DDT in the 1960s.

This week’s South Bergenite has a great article by editor Jaimie Julia Winters about the rebounding of the Osprey in the meadowlands. Read it here.

Don’t forget to follow Jim Wright’s weekly posts about the eaglets at Duke Farms in Hillsborough.

“Since the 1900s, bobolink populations in the northeast have been declining- with a 75% decrease occurring in the past 40 years according to the Breeding Bird Survey. Bobolinks are a grassland bird and a ground nester. The loss of North American grasslands and modern farming practices, that call for the harvest of the hayfields during nesting season, have led to their waning numbers.  But creating No-Mow zones, like those at Overpeck County Park, is one way that we in suburban New Jersey can help.”

This according to DonTorino, whose column Don’s Jersey Birding appears weekly in Wild New Jersey. Read the full article here.

“The Canal & River Trust is designating duck lanes — yes, lanes for ducks — along certain high-traffic routes, marked by a white line and a duck silhouette. Ducks are frequent users of the slender canal walkways, also known as towpaths, but they must compete for space with a gaggle of joggers, cyclists and other humans, many of whom are distracted by smartphones.
Even England’s most astute ducks probably won’t get it, of course, and no one really expects the birds to stay in their lanes. The markings are meant as visual reminders for humans to slow down and be courteous. ”

Yesterday we showed you the entries for this year’s bird box contest. Now here’s a look at the artists themselves, some staff members from Spectrum for Living, and our own Gaby Bennett-Meany.

This free two-hour Birding for Beginners class starts with a short session on basic bird identification at the Meadowlands Environment Center in DeKorte Park in Lyndhurst, followed by a nature walk in the park.  The event is run by the Bergen County Audubon Society and hosted by the NJ Meadowlands Commission. You will have to sign a standard liability release that is good for NJMC/BCAS events throughout the year. To register, contact Marie Longo at 551-580-2372 or longo.mariee@ymail.com

Silence Map of the U.S. shows where we’re drowning out the sounds of nature.
“Noise pollution is just as real as other forms of pollutions, and we run the risk of losing something very precious if we’re not careful: Quiet, restorative silence, as well as the subtle sounds of nature that we’ve evolved to like.” Click here to read more.

Nature was not drowned out in my driveway on 3/14…check out this (admittedly shaky) video. I once read that grackles like these were the inspiration for Hitchcock’s The Birds. 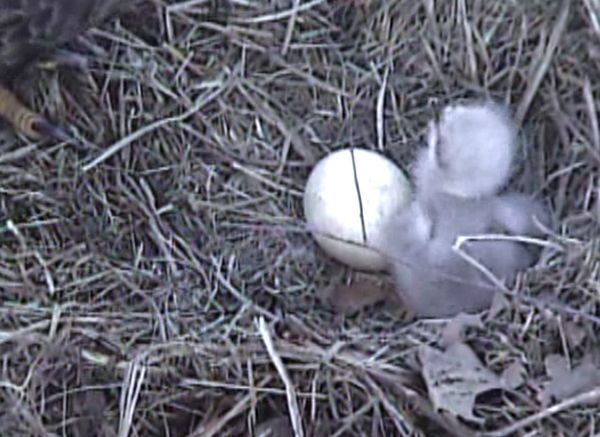 I just posted a nine-photo sequence of yesterday’s eagle egg hatching at Duke Farms, via their webcam. The photo above is of the eaglet taken at 7:09 this morning. – JW. The link is here.