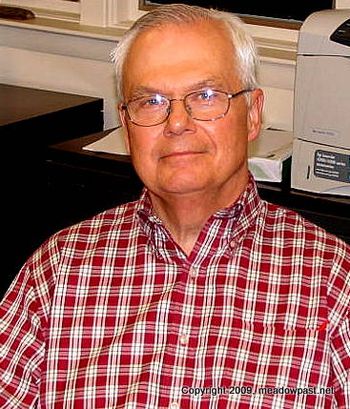 Five years ago, as part of the N.J. Meadowlands Commission’s Oral History Project, we interviewed lots of folks about the region in the old days. We are reprinting the best of them here, every Tuesday, for 11 weeks. This week: Jim Kazalis.

Growing up in Kearny in the 1950s, lifelong Meadowlands resident Jim Kazalis spent much of his free time hunting and fishing with his dad on the Hackensack River near Laurel Hill and exploring local landfills.

In the following audio interview, Jim shares several detailed recollections of his boyhood adventures hunting, trapping and seeking treasure in the Meadows.

Now a Rutherford resident, Jim brings the conversation full circle as he talks about introducing the next generation – his 6-year-old grandson – to the Meadowlands’ wonders.

Click “Continue reading …” below to hear Jim’s stories, read his account about growing up in the Meadowlands, and view archival photos.

In the audio clip below, Jim talks about duck hunting with his father on the Hackensack River in Kearny:

In the clips below, Jim recalls exploring and hunting for treasure in the Keegan Landfill:

In the clip below, Jim talks about his father risking life and limb to carve Jim’s initials on Graffiti Rock at Laurel Hill:

In the clip below, Jim discusses his experience trapping muskrats in the Meadowlands:

In the clip below, Jim reflects on growing up in the Meadowlands:

Below is Jim’s recollection of growing up in the Meadowlands, with archival photos of hunting trips  and a prized find in the landfills.

An Unofficial Park Called The Meadowlands

A long time ago the Meadowlands was an unofficial park claimed by those like myself whose home bordered it.

At the end of WWII, veterans returned home with new lives to build. Because so many men had been exposed to firearms, it was only natural that they would pursue hunting as a hobby.

New Jersey consisted of a lot of undeveloped and open spaces, one of the last in the Metro area would be the Meadowlands. There were so many hunters in New Jersey that one rarely saw the prized of all trophies – the Canada Goose. It is hard to believe that the proliferation of this migratory species which now seems to inhabit every patch of grass year round in this state was literally invisible at one time.

But before conservationists cry foul (or should it be fowl?), hunting was not only sport but it provided food for many tables. My grandparents who lived adjacent to our home on Schuyler Avenue were Lithuanian immigrants who wasted nothing.  My grandmother would carefully prepare the fowl’s meat, the feathers and down were used in the making of handmade pillows, and the remainder was made into soup.

If you look at some of the photos below you can get an idea of what it was like to hunt there. It never seemed surreal that while I was firing my shotgun at birds in flight, in the same line of fire beyond, I could see the Empire State building. 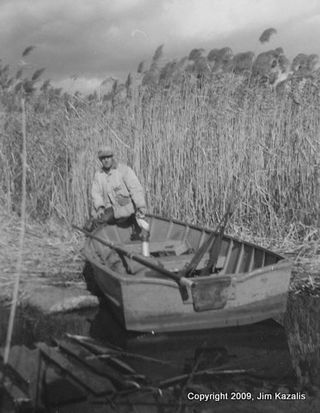 In this photo you can see Bill Kazalis, my dad, sitting on the  gunwale of the boat. That location is directly behind Gunnell Oval in Kearny.

My dad would drag the boat up and over the railroad tracks to get to that creek.  You can see  the Army surplus tent poles he used to push the boat.

For him barriers were just steps that put you closer to doing whatever you wanted to do.  In the years we hunted in this creek, I never saw another boat there. You can also note in the photo that the boat is touching a concrete culvert which is just peeking out of the water. That culvert is still there today to give you a reference on how the water level  has changed. 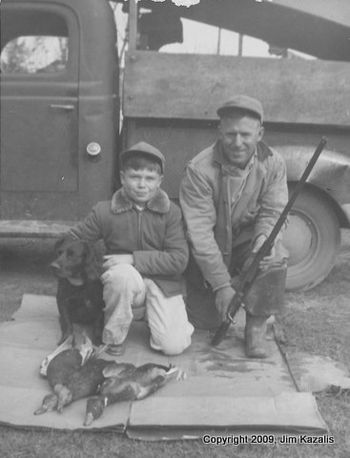 Jim, age 9, his dad Bill, and his springer spaniel Shadow, following a successful duck hunt circa 1955. 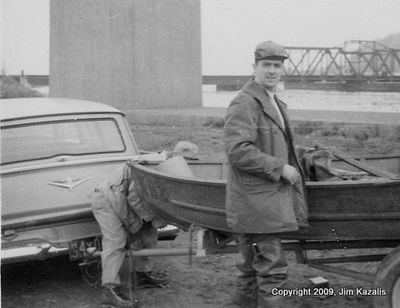 Bill Kazalis and Roy Black preparing for a duck hunt on the Hackensack River in Kearny under the original New Jersey Turnpike (now the Eastern Spur) circa 1960. 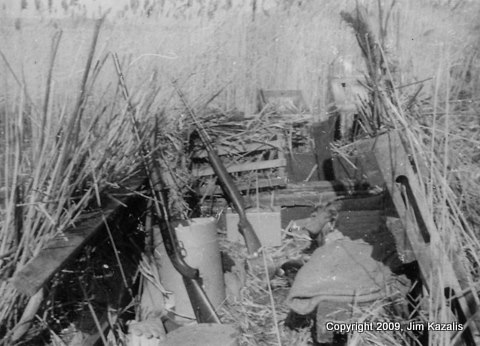 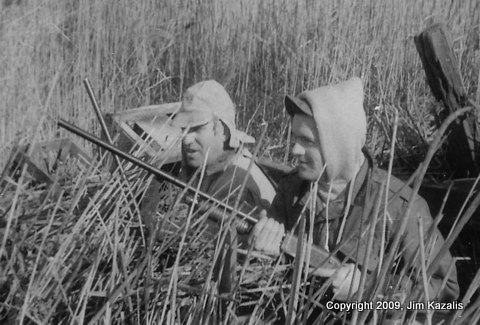 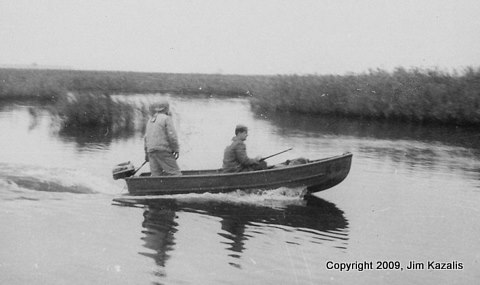 On the hunt in the Hackensack River across from Laurel Hill circa 1960. 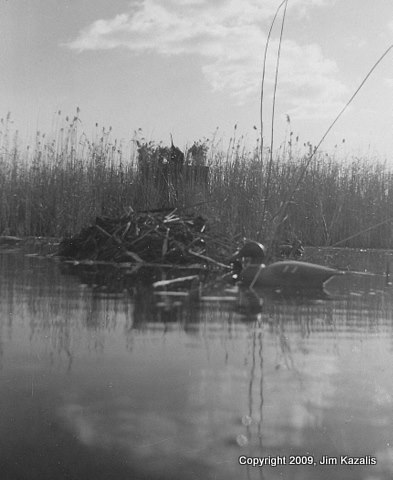 All is quiet on the Hackensack River in Kearny circa 1958. 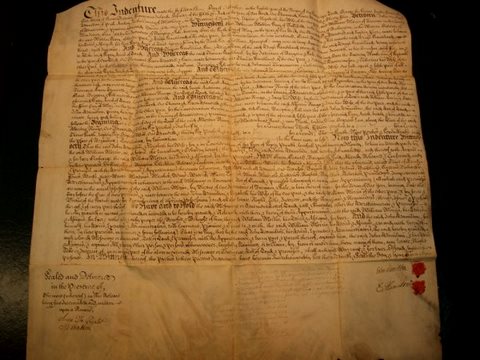 As a boy Jim discovered this 18th century property deed inside a steamer trunk while exploring the Kearny landfills. 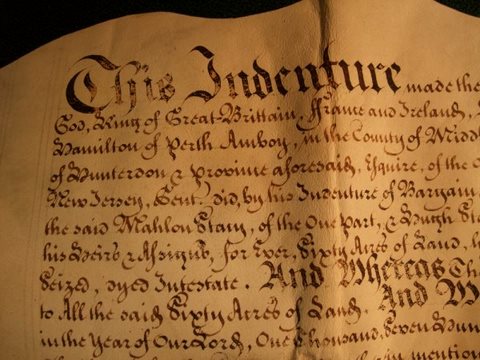