We are honoring Black History Month with a weekly post each Monday throughout February on people and places related to the Meadowlands. The posts are taken from our archives and were originally done by former staffer Jim Wright.

Gethsemane Cemetery in Little Ferry is located on an acre on a sandy hill just off Route 46 and Liberty Street.  The photo above is a view of the cemetery’s entrance on Summit Place. 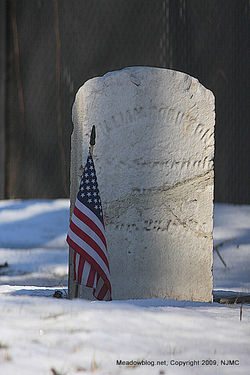 According to Bergen County government, “In 1884, Samuel Bass, originally from Philadelphia, and a highly respected Sexton in Hackensack’s First Baptist Church, died. 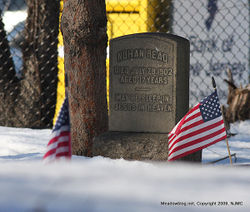 “His church wished to bury him  in the local all-white Hackensack Cemetery, but was denied permission. His family then buried him in Gethsemane Cemetery. The controversy was reported in the African American, local and New York City press.

“New Jersey’s Governor Leon Abbett protested the denial, and sent a strong statement to the State Legislature. As a result, state legislation prohibiting cemeteries from discrimination, which was known as the ‘Negro Burial Bill,’ was passed in March 1884.