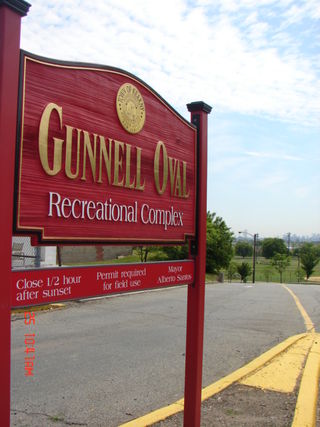 This revived weekly feature is brought to you by the Meadowlands Commission’s Parks Department to give you some historical background on how local places, landmarks, and geographical features  got their name.

We at the Meadowlands Commission are always scratching our heads on how to spell “Gunnell Oval” in Kearny.

The sign says “Gunnell Oval,” but everywhere we look, we see it spelled “Gunnel.”

“Kearny’s Gunnell Oval Park was named after Benjamin E. Gunnell.  He was a popular youth in town, attended the Roosevelt School,  and was a very good baseball player.

He died in 1918 fighting the Germans in WWI.

The sign at the entrance of the park spells his name GUNNELL.
The  Web site for the Kearny Monument for soldiers who died in for WWI has his name listed as “Gunnel.”

Can anybody shed more light? (We are betting that “Gunnell” is the correct spelling.)

One thought on “What’s in a Name: Gunnell Oval”